What is directx 6 application

Direct X is a set of APIs (application program interfaces) developed by Microsoft. It provides software developers with resources to write Windows-based applications that access hardware features of a computer without knowing exactly what hardware will be installed when the program eventually runs. By using the interfaces provided by DirectX, software developers can take advantage of hardware features without being concerned about the implementation details of that hardware. 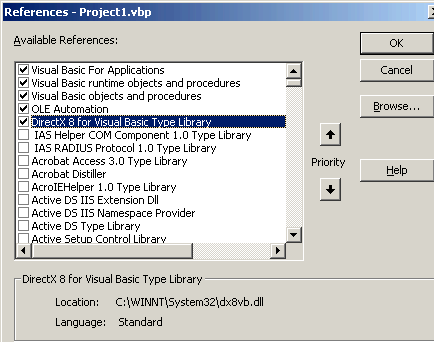 The full benefit of DirectX is most evident in PC games. Unlike console gaming machines such as the PlayStation or GameCube, for example, computer game developers are producing a game that needs to be designed to work well on a variety of systems — as opposed to one system that is the same for all end-users.

DirectX made its debut in 1995. It was the first encouragement from Microsoft to move game programmers in the direction of developing for Windows 95 instead of DOS. Until then PC games were largely written in DOS, which had the capability to access the computer's sound and video hardware directly. To keep the speed of the game up, developers were looking at having to write their own drivers for a wide variety of display adapters. Tha could turn out to be a nightmare for the developer and, in turn, cause compatibility issues for some end-users.

DirectX introduced an intermediate layer that translated generic hardware commands into specific commands for particular pieces of hardware. In particular DirectX allowed multimedia applications to take advantage of hardware acceleration features supported by graphics accelerators. With DirectX game developers were able to take advantage of Windows without sacrificing performance in the game.

DirectX in the Middle

One can look at DirectX and its sub-layers as something that lies between your game or application and your computer hardware. If the software you are using is DirectX-compliant and if the manufacturer of your specific hardware has made its products DirectX compatible, then you'll find your hardware supported in the vast majority of games you play and applications you use. DirectX basically puts the responsibility of hardware support on the hardware manufacturer rather than the software developer, which really leads to optimal software performance and hardware compatibility.

Unfortunately, in its first few releases, DirectX didn't go over too well with developers, many of whom found the API horribly designed and complicated — not to mention proprietary. Over the years, however, with improvements to each DirectX release, DirectX has become the standard. It evolves as computer hardware and game peripherals advance allowing for support of specific hardware features in new computer games.

For those who don't find themselves rushing out to buy the latest and greatest in 3D computer games, DirectX is used in a multitude of Windows based applications — anything that requires full-color graphics, video, 3D animation. and complex audio. Even if you're not a gamer you should still stay on top of the DirectX releases and the latest support information to ensure optimal performance on a Windows-based system.