What happened to meebo iphone app

Meebo is a Web-based, rich multi-network chat service that boasts over 45 million users worldwide. As of Apple's iPhone OS 3.0 event on Tuesday, the company now also has a native iPhone app in the works, complete with one of the platform's best and most-anticipated features: Push Notifications. To learn more about Meebo's forthcoming app, Ars spoke with Seth Sternberg, Meebo's co-founder and CEO.

Meebo supports a wide variety of networks, ranging from incumbents like AIM to new challengers like Facebook and even Flixter (yes, even a social movie service apparently needs its own chat network now). Sternberg tells Ars that Meebo wants "everything we do on the web to be available on the iPhone app," and the company has almost nailed that goal. While all of Meebo's supported networks will be available on its iPhone app, as will Flixter activity notifications like a friend's film rating, Meebo Rooms will not make the initial release.

When asked why Meebo has waited until now to offer a native iPhone app (besides a Web-optimized iPhone app and Android app ), Sternberg offered the obvious answer: Push Notifications. "We have high standards, and a native chat app without some kind of a background system is a bad experience." Push Notifications was the answer Meebo needed, and the forthcoming iPhone OS 3.0 feature will allow users to be alerted of new messages even when they're not running the software.

On that note, we asked Sternberg about how far Push Notifications can be pushed and customized. After all, the company brags that its users send a collective five billion IMs every month—that could turn into a lot of pushed notifications. "We don't expect that most users will run into too many Push Notifications, though," Sternberg explained. The way his company figures it, users will typically receive a notification about a new message, then open Meebo to respond, negating any further notifications for that session. 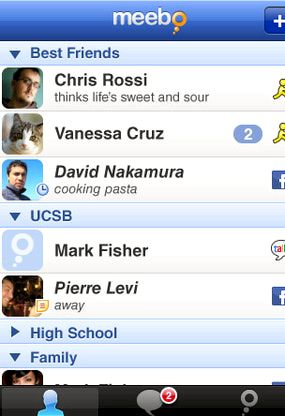 As far as Push Notification customizability, though, Sternberg admitted that neither Meebo nor Apple has spent much effort on this aspect of the feature. For instance, there is no way to throttle the number of chat-related Push Notifications one receives within a specific time period. Further, you cannot set a "quiet hours" period like you can with AOL's IM-to-SMS forwarding feature. From what Ars knows of the initial iPhone OS 3.0 beta, the only customization Apple has given to Push Notifications so far is e-mail-like polling frequencies of push (obviously), manual, or 15, 30, and 60 minutes. Apple still has plenty of time to polish this aspect of Push Notifications, though, and Sternberg said that he would relay our feedback on this potentially battery gobbling and late-night-awakening feature to the app's developers.

Sternberg says that Meebo has no plans to harness what is easily one of Apple's other favorite new features: charging for in-app micro-content. Active chatters need not worry about Meebo nickle-and-diming them for things like emoticon packs or access to specific networks.

One of the final items we discussed with Sternberg is how well Meebo's iPhone app will integrate with the website. He says that while Meebo for iPhone will offer the company's single-sign-on option, Meebo has not yet decided whether it will be required. Security-conscious readers should know that all IMs sent via Meebo's various apps go through the company's servers, whether you use the single sign-on or not. But there are usability advantages to this system as well. For example, Sternberg explained that many of Meebo's users want to log into AIM, MSN, Yahoo, and Facebook on the desktop, but only, say, AIM and Facebook in the mobile app. The single sign-on approach can facilitate this with roaming preferences that could be set on the desktop, making one's initial Meebo for iPhone sign-in experience quite smooth. 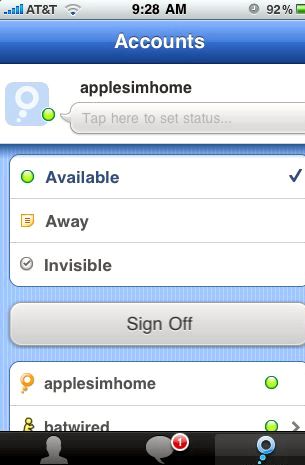 But not requiring a Meebo account and allowing users to specify their own services on the iPhone is still an option. Hopefully it will stay that way, but we'll have to wait and see the final product sometime this summer.

As for an ETA and a price, Sternberg says Meebo plans to be ready for whenever iPhone OS 3.0 officially ships. The pricing question, however, is one that Meebo has yet to answer. On the one hand, charging for chat apps seems a little tough (though other lesser-known multi-network apps that are already in the store seem to be doing ok). "Then again," Sternberg countered, "Meebo is not a super cheap app to run." Since the company offers features like saving chat transcripts and a single account sign-on for logging into all of one's chat networks, there are certainly not-insignificant costs involved in running Meebo.

On the site, Meebo has a solid advertising system that has done the company well. But Sternberg is not yet sure whether advertising is the way to go with a mobile chat app that is already short on screen real estate. If Meebo for iPhone does ultimately get a price tag, it will very likely be in the low price range to keep it accessible. After all, the company views its mobile clients in part as growth leaders, as many users end up at Meebo in their desktop browsers where the chat service's ad-based business model took off some time ago.

When Meebo arrives sometime this summer, it will probably be one of the best examples of what is possible with iPhone OS 3.0's new Push Notifications features. While a few details have yet to get ironed out for both Meebo and one of Apple's most anticipated additions to the iPhone, Meebo users will likely not be disappointed with the company's official, native arrival on Apple's gadgets.