All-plastic design. Speakerphone could be louder and deeper.

As Samsung continues to refine its flagship Android smartphone, the Galaxy S5 is better than ever. It's the most powerful phone you can buy, and is a lock for our Editors' Choice on T-Mobile. 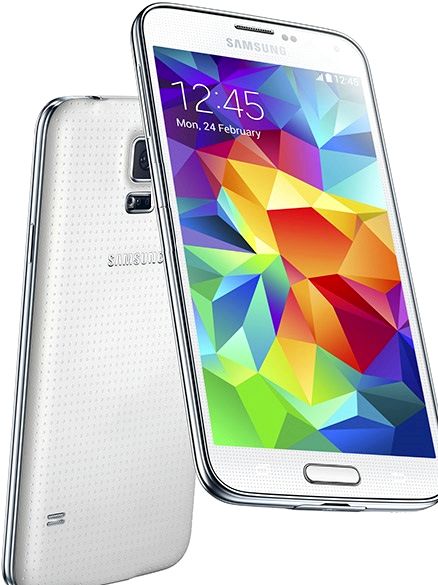 The Galaxy S5 still has an uncomfortable relationship with its own materials. At 5.85 by 2.85 by .31 inches (HWD) and 5.1 ounces, it's a big phone, but that's par for the course nowadays. It's all plastic. The back is a stippled, textured faux-leather, borrowed from the Galaxy Note series, which is a major step up from the slick, fingerprint-collecting casing on the Galaxy S4. The back comes in black, blue, gold, or white. The design is almost ruined, in my mind, by a cheap chromed-plastic bezel. You'll learn to live with it, but I didn't learn to love it. Near the top, a useful colored LED blinks blue when you have a new message. On the bottom, a large micro USB 3.0 port promises fast charging and fast data transfer in exchange for needing to be covered by a silver plastic door. A physical Home button with dedicated, light-up back and multitasking buttons are a little more convenient than the purely virtual buttons on the HTC One.

The S5 is water-resistant and just a bit rugged; it's about as tough as last year's Galaxy S4 Active . That means it's sealed against liquids and made from flexible materials, so you don't have to worry about getting it wet or dropping it on its edge. You can still crack the screen, though, so a screen protector would be useful.

Dr. Ray Soneira of DisplayMate Labs put it best. The Galaxy S5 has the best screen we've seen yet on a smartphone. It's brilliant, vibrant, and highly customizable, appearing brighter and punchier than competing displays in almost every circumstance. The trick isn't just the 5.1-inch, 1080p Super AMOLED panel, although the panel itself has better color representation and a more even subpixel layout than the S4's. It's software. Samsung's Professional Photo and Cinema Modes give picky viewers true whites, while Adapt Mode constantly alters the display color for maximum readability, and Super Dimming Mode makes the phone viewable in the dark without blowing out your eyes. Adapt Mode also deals very well with outdoor viewing conditions; I had no problem reading anything on my S5's screen through a week outside in Seoul.

The screen has a few other neat tricks, too: It works pretty well with styli, including using the tip of a graphite pencil on the screen as a stylus. While there was still a tiny bit of lag, the GS5 showed much better precision when tapping with a small stylus than other Android phones I've tried, except for the Galaxy Note line.

The Galaxy S series have always been excellent voice phones and this model is no exception. The earpiece here gets really loud. If you need volume, you'll be happy. The earpiece tone can also be tuned to your specific hearing profile, just like on the Galaxy S4. Do that if calls sound a little muddy, which they might on the default setting. Transmissions in normal call settings come through clearly. The phone cancelled street and car noise very well, although some background chatter from a Starbucks came through under my voice.

The single, small, back-ported speakerphone performs perfectly adequately, but it's nowhere near as clear and powerful as the HTC One's front-ported BoomSound speakers. Transmissions through the speakerphone mic, on the other hand, are excellent thanks to Samsung's top-notch noise cancellation. I also had no problems with Bluetooth headsets. 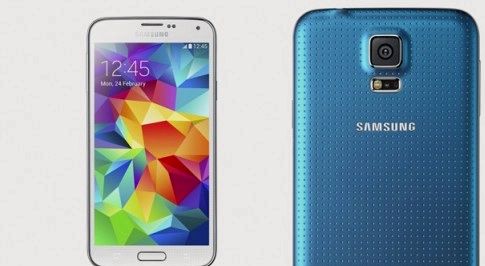 Battery life looks very good. Because of SIM provisioning issues, I couldn't complete our standard single-long-call test, but the 2,800mAh battery was still at 41 percent after 11 hours, 15 minutes of calling. In a week's worth of use, it lasted out the day every time.

The new Ultra Power Saving mode delivers peace of mind: Kick it in when your battery is around 15 percent to limit the phone to calling, texting, Facebook,and Web browsing, and watch the phone report that it magically has more than a day's worth of standby time remaining. With the battery down to 2 percent, I managed to squeeze out several hours of standby, a few text messages, and even a brief phone call. That was magical.

The Galaxy S5 takes networking to a new level. Its Wi-Fi performance outdoes the HTC One significantly when 25-50 feet away from an 802.11n router. At a 30-foot distance from a router with a 30-Mbps-up-and-down connection in a tough environment, the HTC dropped to 7-10Mbps but the Galaxy S5 maintained 15-20Mbps. I saw a similar difference up to about 75 feet, when they both dropped off. That will make a serious difference when Web browsing.

Lousy Starbucks wireless connections could be further enhanced by Download Booster, a Samsung feature which combines Wi-Fi and LTE throughput when you're downloading files larger than 30MB. I'm worried about this one, though, because it was disabled on my phone. Samsung insisted to me that it would be enabled with a firmware update at launch, but this is just the kind of thing a carrier could kill.

Otherwise, the S5 comes in four different carrier LTE versions. We tested the T-Mobile model, which features the carrier's Wi-Fi calling. Radio-wise, the handsets all support various carriers' highest-speed networks but won't switch between U.S. carriers well. The non-T-Mobile models lack T-Mobile's main 3G band; the AT&T and Verizon models lack each other's 700MHz LTE, and the Sprint model won't work on anyone else's LTE network. So you need to buy the right model for your carrier and stick with it, like with the HTC One but unlike with the carrier-flexible iPhone 5s.