Monaco whats yours is mine ios

Monaco: What’s Yours Is Mine Review (PC)

Sky-rocketing from the fringe minority to the mainstream, the indie gaming scene has come a long way in recent years. Titles like Braid, Super Meat Boy, Cave Story and Limbo all played a part in bringing indie games to the average gamer. Once in a while though, a game shows up that overshadows everything that has come before it. A title so ground-breaking, it raises the bar for not only those on the indie scene, but all developers in general.

The brainchild of Andy Schatz, ‘Monaco: What’s Yours is Mine’ has been around (at least in concept) since as early as 2003. It wasn’t until a prototype of the game won the Independent Games Festival Grand Prize in 2010 that the spotlight was cast upon it. Mixing simple pixel-art visuals with modern shading techniques, it instantly caught the eye of gamers worldwide. Over three years later, a rewrite from the ground up and a brand new game engine, Monaco is ready to swindle a spot on your hard drive.

Having been incarcerated for theft, the Locksmith and his band of fellow scoundrels must escape prison. As free men (and one woman) they receive help from other shysters. Now on the run with police in tow, Monaco itself becomes the bastille from which the gang must liberate themselves. With the intention of vanishing into thin-air, a course is set for Beirut. If only escape was so simple, mes amis.

Slipping through the clutches of the law is neither easy, nor is it cheap. Passports, money and erasing all traces of your exploits will be required if you are to start a new life abroad.

A simpler premise than Monaco there is not. Every level consists of working your way through the floors of large buildings collecting cash, reaching an objective point and then working your way back down to an escape point. Any building is a target for the gang. Banks, hospitals, museums, nightclubs and even the Royal Palace are all on their hit-list.

The buildings you visit are heavily secured. Security guards, dogs, CCTV cameras and other traps are scattered around inside. Assembling a team to slip in and out undetected takes skill and thought. 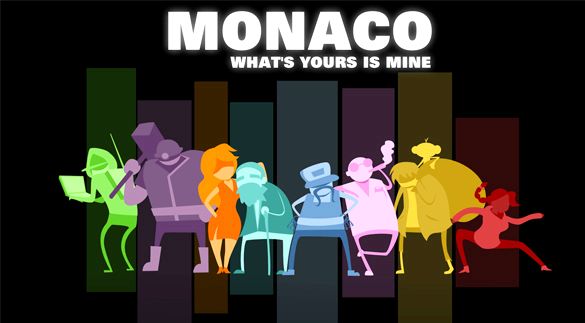 The quick-fingered locksmith can pick a lock quicker than any of the other characters, while the cleaner can use chloroform to incapacitate enemies. The pickpocket uses his trusty pet monkey to pick up hard to reach coins, and the lookout can see where guards are on the map.

Each of Monaco’s thirty-three levels has been intricately designed with experimentation, competition, and replayability in mind. The route you take, the characters you use and how you deal with each of their inhabitants are all interchangeable. No specific play-style is encouraged in most stages of the game. Players who prefer a more tense experience are free to hide in the shadows, sneaking around undetected. Those who want a more hectic experience can dash through the locales, collecting coins, dropping smoke bombs and gunning down guards as they make a break for the getaway vehicle.

Controls in Monaco have been streamlined, meaning each character behaves exactly the same. An action button to use items, a button to sneak, and movement keys (Joystick on a controller) are all there is to it. Controls are responsive using both the controller and mouse & keyboard. In action sequences where weapons like the crossbow were used, the mouse & keyboard offered more accuracy, but both controls schemes work flawlessly.

A number of items and weapons are available throughout the game. The more gung-ho among you will automatically reach for the shotgun or assault rifle, whereas those who prefer to sneak may instead go for the EMP grenade or crossbow. Monaco is mostly about (trying to) sneak through security though, so ammo is severely limited. Knowing when to pull the trigger or when to use your last smoke grenade may mean the difference between life and death. When you do run out of ammo, collecting 10 coins will give one more use to the weapon or item you are using. Preventing the game from descending into a kill-fest is a clever design choice and will force players unfamiliar with such mechanics to think twice about how to escape a sticky situation. 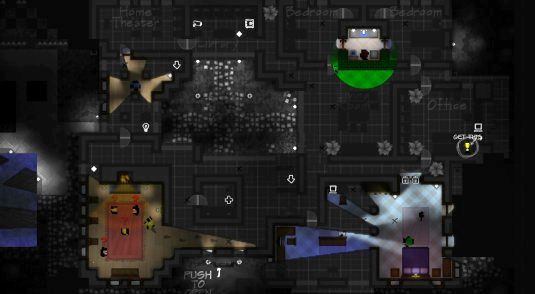 The single-player and multi-player modes of Monaco are almost entirely different from one another. Working alone requires a methodical and careful approach. In the first half of the game this style of play may not be entirely applicable as it is a forgiving experience. In the second half a wrong move or a misfire can mean losing a life. Once a character dies in single-player they cannot be revived and another character must take over. You don’t want to get to the top-level of Galerie D’art with only one life left, let me tell you.

With friends (or strangers) Monaco becomes an entirely different beast. All but the best band of thieves will fall apart. Order turns to chaos and coin-lust takes over. Alarms will be tripped, and police will storm you and your comrades. Unlike single-player however, deaths are not permanent. So long as someone can reach you, they can revive your character. Only the most coordinated of players will reach the top of the leaderboard – which already have some pretty tough scores to beat.

Graphically, Monaco is a mix of old meets new. Stylish shading and lighting effects meld beautifully with simple, pixel-art style character sprites. Levels range from neon-soaked nightclubs to gloomy underground caverns. It’s a unique visual style that has come on leaps and bounds since the prototype (now known as Monte Carlo) won the award for Excellence in Design at the 2010 Independent Games Festival.

Featuring a full ragtime piano score from Grammy-nominated composer Austin Wintory, Monaco’s soundtrack is an utter delight. Sneaking through stages to mellow piano riffs, only to be caught and for the tempo to ramp up is an experience in itself. The music becomes part of the gameplay.

Despite the stellar appearance, frantic gameplay and irresistible ragtime soundtrack; Monaco does have some very slight issues. On more than one occasion shotgun-toting police officers were able to shoot through walls and around corners, leading to ragequit inducing deaths. The range of the shotgun is also somewhat dubious. Having to be perfectly in line with ladders also caused frustration and led to more than a few profane outbursts; a little more feedback when walking into the wrong part of the ladder or walls would be appreciated.

The minor irritations mentioned above are but mere specks of dust on an otherwise lovingly crafted masterpiece of a game. Every aspect of ‘Monaco What’s Yours Is Mine ’ is exemplary; the lengthy two-sided story, the mellow but tongue-in-cheek soundtrack, the stylish visuals, the frantic online play, and the endlessly replayable levels. Pocketwatch Games has reached a new height of excellence that even AAA titles will struggle to reach.

Play it online. Play it offline. Play it solo. Play Monaco with your grandmother. At £11.99($14.99) it is a steal. By not playing it you would be robbing yourself of one of the most exciting gaming experiences in years.

10 Pockets perfectly picked out of 10