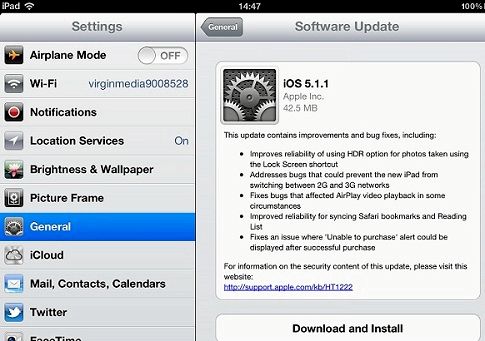 Need to connect to a computer via USB to set up iTunes Wi-Fi Sync. AirPlay mirroring limited to iPad 2, third-generation iPad, and iPhone 4S. Using Mail and Notes with iCloud requires creating an @me account. Siri voice control only available on iPhone 4S.

Apple iOS 5.1.1 is far from a huge update, but it fixes bugs and security holes in Cupertino's mobile operating system.

iOS 5 was a significant upgrade to Apple's mobile operating system that added numerous long sought-after features such as computer-free setup, wireless syncing, and a fresh take on notifications. iOS 5.1.1 isn't as game changing as that update; in fact, 5.1.1. brings exactly five changes, all of which are under the hood bug and security fixes. It's not a sexy update, but a welcome one that you should download immediately. Note: iOS 5.1.1 is compatible with the iPhone 3GS . iPhone 4 . iPod touch 3rd Generation . iPod touch 4th Generation . iPad . iPad 2 . and "new iPad" (aka iPad 3).