"Driving a vehicle built for offroad is quite an experience on tarmac surface. In this level you may get far and fast, but gasoline is a limited resource."

Highway  is a stage  in Hill Climb Racing. It is the fourth stage to be unlocked. It costs 125,000 coins.

Highway  is known for the extreme increases in gasoline distance. The Highway is the first stage in Hill Climb Racing where the levels don't increase by increments of 200 meters. 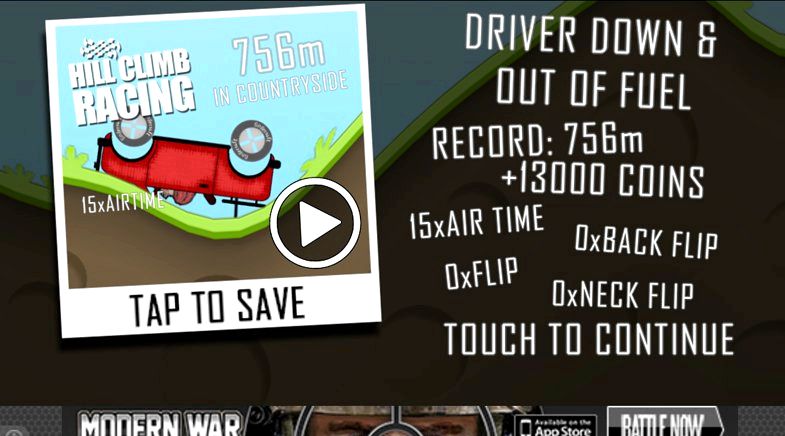 The Highway is a detailed hilly highway with soft hills and a large variety of coins. The distance between gas canisters greatly increases the longer the player goes. It is also one of the best stages for making coins with fast vehicles.

Considered by several fans the best and most ideal stage in the game. Upgraded cars will get millions of coins during this stage. Almost all vehicles are able to drive here with little difficulties.

After 6km, the gas canister distance starts to be 700m long, increasing until almost 1000m long around 15km, the player needs to know exactly where the canisters are to prevent jumping over the canister. Hence, those vehicles that have fuel upgrades like the Truck. the Kiddie Express. and the Super Diesel 4X4 are recommended if you wish to cover larger distances. After losing the carriages on the Kiddie Express, the vehicle has easy control, speed and traction, allowing you to reach incredibly long distances. The Kiddie Express is probably the best option.

Between 1430 and 1460 m, there is a steep hill which can be difficult for weaker vehicles without significant upgrades to climb.

In Highway, levels mark progress every 300m, starting from 600m, and have a coin bonus starting at 17,000 coins for the first level which increases in increments of 7,500 coins for every level cleared.