The self-propelled M-110 8-inch [203 mm] howitzer first entered service with the US Army in 1963. The vehicle itself transports only two projectiles and five men, while the remainder of the ammunition and the crew is on board a tracked M548. The M-110 Howitzer fired a 200-pound projectile out to almost 17 kilometers (16,800-meters). 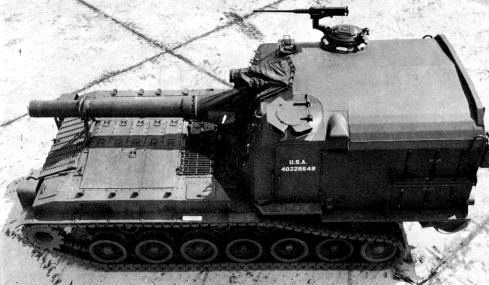 Designed to be part of a common family of weapons utilising the same chassis components, the M107 and M110 were essentially the same vehicle mounting different barrels. The hull of the M110 is identical to that of the M107 and is made of all-welded armour and high-tensile alloy steel with the driver at the front of the hull on the left, the engine to his right and the main armament at the rear.

The M107 self-propelled 175-mm. gun and the M110 8-inch howitzer had identical carriages but different tubes. The 175-mm. gun fired a 174-pound projectile almost 33 kilometers. This impressive range made it a valuable weapon for providing an umbrella of protection over large areas. The 8-inch howitzer fired a 200-pound projectile almost 17 kilometers, plus being the most accurate weapon in the field artillery. The 8-inch howitzer was found with most division artilleries, and both the 8-inch howitzer and 175-mm. gun were with field force artillery. At field force the proportion of 8-inch and 175-mm. weapons varied. Since the weapons had identical carriages, the common practice was to install those tubes that best met the current tactical needs. One day a battery might be 175­mm.; a few days later it might be half 175-mm. and half 8-inch.

The M110A2 was an M110A1 equipped with a double-baffle muzzle brake. The M110A1s had been limited to zone 8 of the M188A1 propelling charge, but the muzzle brake alleviated excessive recoil forces and allowed the howitzer to fire zone 9, which permitted greater range. 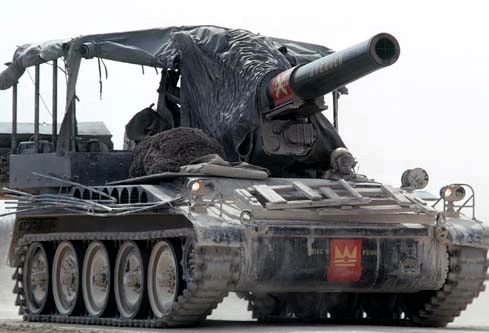 The M110A2 is a heavy self-propelled artillery piece designed to provide general artillery support to ground troops and close general support to armored columns, and was built in the early 1960's. It is highly mobile and maneuverable, and can be airlifted in large cargo aircraft. The gun is an 8" Howitzer traversing in it's own mount at the rear of the vehicle. The large spade at the rear is required for the massive recoil. It is hydraulically raised and lowered, and keeps the vehicle in place when the gun is fired. With a range of 20 miles, it has pinpoint accuracy. Being mounted on a tracked chassis allows it to support infantry or armor in nearly all terrain conditions. This diesel powered chassis is used for two other vehicles one of which is the M578. It weighs 52,600 lbs, and has a top speed of 34 mph.

The M110A2 is the largest available self-propelled howitzer in the Army's inventory. It is deployed in division artillery of general support battalions and in separate corps- and Army-level battalions. Missions include general support, counterbattery fire, and suppression of enemy air defense systems.

The M110A2 is a self-propelled heavy artillery cannon with a crew of 12. Designed to be part of a common family of weapons utilising the same chassis components, the M107 and M110 were essentially the same vehicle mounting different barrels. This full-tracked, self-propelled artillery weapon that fires a 200-pound, eight-inch diameter projectile. The shell leaves the muzzle at a velocity of 2,300 feet per second and can travel more than 18 miles.

Ammunition includes standard high explosives, bomblets and high explosive rockets. It is found in some corps artillery units. This howitzer system was designed to provide medium-range, general support artillery fire. Powered by a Detroit Diesel, it is not armored and can travel at a top speed of between 30 an 45 miles per hour. The M110A2 was built by Bowen-McLauchlin-York of York, Pennsylvania. Widely used in Vietnam, the Army received this howitzer in 1963. There were 1,023 M-110A2s in the Army inventory in the early 1990s, prior to the system being phased out of service.